This is one of Donna Elias' most popular paintings. It's image has been used to adorn many licensed products, including pillows, rugs, serving trays, and many other gift lines. This is the ORIGINAL WATERCOLOR PAINTING -Lighthouses of North Carolina's Outer Banks. Features the following lighthouses: Ocracoke Island, Cape Lookout, Cape Hatteras, Bodie Island, Currituck Beach.

FULLY INSURED SHIPPING only $25.00 anywhere in the USA.

The is an ORIGINAL Painting. Painted by artist Donna Elias © 1995.

By Donna Elias and Mother Nature

In October 2012 New Jersey and much of the North East was hit by the worst storm in a century, Hurricane "Super Storm" Sandy.

Remarkably, when Donna was finally allowed back to her studio, some of the paintings that hadn’t floated away or been eaten by crabs were still beautiful to behold!

Now, the artist would like to present you with the opportunity to own one of these “Salt-watercolors” at a fraction of their original cost. Each is a one of a kind original painting by Donna Elias, altered in some way by Mother Nature herself. Each painting comes with a signed and dated certificate of authenticity by Donna Elias.

Although this beautiful painting is technically a "Salt Water Color", it is in remarkably GOOD condition. 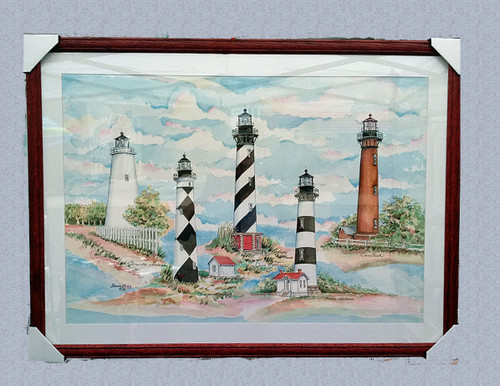