Donna Elias was born in Newark and raised in Atlantic City, New Jersey. While attending Atlantic City High School Donna took an art class which would turn out to be her only “formal” schooling in the trade. As a teenager Donna knew she wanted to be an artist and worked hard practicing and teaching herself the skills to be a good one. While still in high school the aspiring artist took a job at Louis Artist Village on the boardwalk. Louis was a landmark in AC, where dozens of portrait and caricature artists worked from morning to the wee hours of the night with their eccentric (and beloved) boss Louis Levine. Donna learned a lot from Louis and the other artists, as well as becoming a talented caricature artist in her own right. Donna stayed here for a couple of summers and had the time of her life.

A few years later, in 1988, Donna and her husband opened a small gallery in Cape May, New Jersey. At the time Donna was painting and sketching an eclectic mix of subjects from Dragons and Wizards to Fashion and landscape. Cape May was a wonderful place for an artist, full of beautiful Victorian era homes and hotels, a gorgeous beach and towering lighthouse. The lighthouse caught Donna’s attention and her subsequent renderings of it were well received. The artist decided to paint other local beacons, now moving from primarily pen and ink to watercolor, which she was quickly mastering. Donna’s lighthouse work was a home run with the public and her husband suggested they try selling the work nationally through coastal retail outlets. Donna launched her “Great American Lighthouses” collection. The series was a personal and commercial success. The artist ended up visiting over one hundred lighthouses and finishing some three hundred paintings for the collection (which she still adds to occasionally.)

With her husband / manager Les Kammerman at the business helm, Donna found herself spending the next twenty years not just painting, but touring the country with one woman shows at museums, lighthouses, lifesaving stations and even at theme parks such as Walt Disney World and Sea World. She was commissioned to paint the official grand opening posters for Universal Studios Islands of Adventure, which featured a mythical lighthouse as its logo. Another highlight was two appearances on QVC television where she promoted a line of lighthouse Throws she designed.

The artist has won numerous awards including first place in watercolors at the Mystic National Outdoor Art Festival and from museums for her contributions to maritime history. She also received the official endorsement of the US Lighthouse Society.

Ms. Elias wasn’t satisfied just painting lighthouses though, and her love of the beach and shore motivated her to begin a coastal series in 2000 called “By the Seaside.” This colorful series features paintings of beaches, shore birds, coastal cottages and beach chairs. It’s currently her most popular work.

In 2015, Donna Elias and Steve Murray released “To the Lighthouse!” - an educational children’s story book. Murray, a lighthouse historian wrote the story and Ms. Elias illustrated the book which was published by Exit Zero of Cape May, New Jersey. Well received and a local best seller, the two look forward to collaborating on another book soon.

Donna Elias has presented “One Woman” art shows from Key West, Florida to Bar Harbor, Maine as well as appeared on television and radio. Here are a few of the highlights: 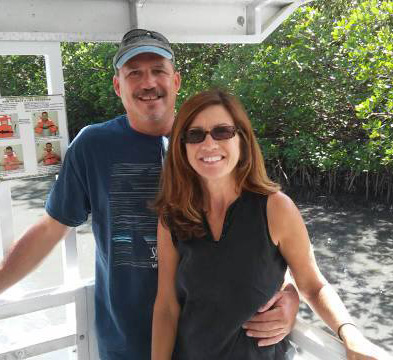 Partners in business and life... Les Kammerman and Donna Elias